Love You Hate You Miss You by Elizabeth Scott 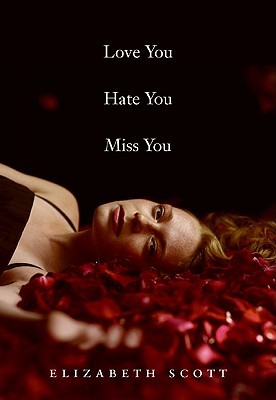 Get this, I'm supposed to be starting a journal about "my journey." Please. I can see it now: Dear Diary, As I'm set adrift on this crazy sea called "life" . . . I don't think so.

It's been seventy-five days. Amy's sick of her parents suddenly taking an interest in her.

And she's really sick of people asking her about Julia. Julia's gone now, and she doesn't want to talk about it. They wouldn't get it, anyway. They wouldn't understand what it feels like to have your best friend ripped away from you.

They wouldn't understand what it feels like to know it's your fault.

Amy's shrink thinks it would help to start a diary. Instead, Amy starts writing letters to Julia.

But as she writes letter after letter, she begins to realize that the past wasn't as perfect as she thought it was—and the present deserves a chance too.

I had a really hard time liking Amy. In the beginning I thought she was irritating, but as the story started unfolding itself I started to like her.
The person she was before Julias death and the person she was after were to completely different people. The person she is when the book ends, is again a whole other person - but that was the person I really liked.

When she finally understood that Julia might not have been the best friend and she started talking to Caro, that was some of my favorite parts about the book. The parts where she takes action instead of just being sad or angry all the time.

I LOVED Patrick. He was shy and yet whenever Amy and him was alone, he talked to her. I doubt he told other people the stuff he told her.

I hated Julia but in another way I really liked her. It is hard to explain. But she had some characteristics that just was provocative, and then there was the Julia with Amy - two different people (for the most part).

I really enjoyed the book, but I also thought it was missing something. Therefore 3 out of 5.