This week have definitely been good for reading! I've been on medical leave this week since I had to go to the doctor's on Sunday so I had a lot of time to read! I'm fine now and I have to go to work tomorrow so all is fine!

On blogging
Even though it's been a good week for reading it hasn't been that good for blogging. I haven't really been into it but I'm trying my best to come back next week!


On reading
My Friday reads is basically the books I read all week. I also read Jane Steele by Lyndsay Faye at night this week since it's my eARC for the month.

Even though I only finished a single book (which is technically two books) this week I read a lot! I read about 100 pages in Jane Steele, 100 pages in Sense and Sensibility and I'm now just over 400 pages in The Goldfinch by Donna Tartt! The book I finished is The Shamer Chronicles 1+2 which is The Shamer's Daughter and The Shamer's Signet both by Lene Kaaberbøl.

I'm really enjoying all the books and I didn't expect to get through The Goldfinch this quickly! Hopefully I'll finish it next week! 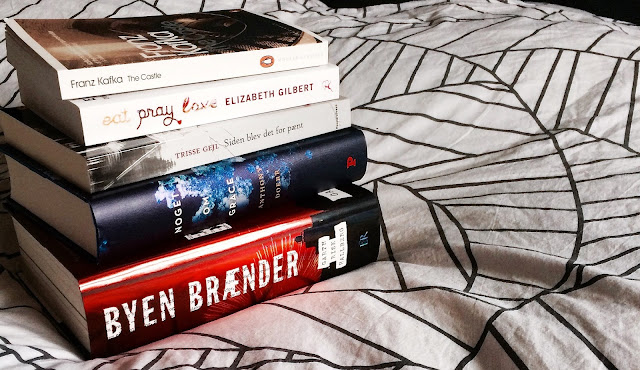 Yes, I bought A LOT of books this week but I blame my Birthday and good deals! Arnold Busck - which is one of our big bookstores here in Denmark - had this offer going where you could hand in an old book (in good condition, of course) and then get 50% off a new book! They were collecting books for this new 'swap a book' concept which is basically like the little free library where you leave a book to take a book!
Aside from that offer they also had this big sale going on.. Oops.

So, I got The Castle by Franz Kafka, Eat, Pray, Love by Elizabeth Gilbert - which I've been wanting for a while and a book by a Danish author called Siden blev det for pænt. I had never heard about The Castle before but I love the penguin modern classics and the fact that he never actually finished this novel and it ends mid sentence made me NEED it.

For 50% off I got About Grace by Anthony Doerr and City on Fire by Garth Risk Hallberg which was just released here in Denmark.

I haven't read any of these yet but About Grace is on my reading stack for this month!

So,  Denmark is a tiny country so even though I live in one end of the country and our capital is in the other end, we managed to drive there and back in a day. It's actually quite normal to do so because it's only a 3-4 hour drive from Esbjerg to Copenhagen. So, I got to visit this amazing bookstore called Politikens Boghal and it's in two storeys! I had some birthday money from my mom so I got these four books!

I've had my eye on both A Little Life and A Tale for the Time Being for a while now! So I couldn't pass them up! The Versions of Us has intrigued me ever since I saw it on netgalley and while I don't like historical fiction, especially involving World War II, I picked up All the Light We Cannot See because I just bought About Grace... Yes, that's my reason.

Even though I don't have a picture I also got a 'Literary Listografi' which is basically bookish lists you have to fill in yourself! I have never seen anything like this in real life so I couldn't pass it up!

I also got my very first penguin mug as a birthday present from my brother and this book clock from my other brother!

I may have just ordered another book because I got a bunch of coupons from sites for my birthday.

On discoveries
Last week I mentioned that I'm now a bullet journal junkie and this week I'm bringing you a some IG accounts whom have inspire me.


I also discovered a bookish DIY where you can make your own dustjackets! Check it out here.


On all the rest
On the blog this week


Next week is going to be a surprise since I don't have anything planned except Top Ten Tuesday and First Parargaphs!
Posted by Unknown at 13:38