My first ever OwlCrate unboxing! 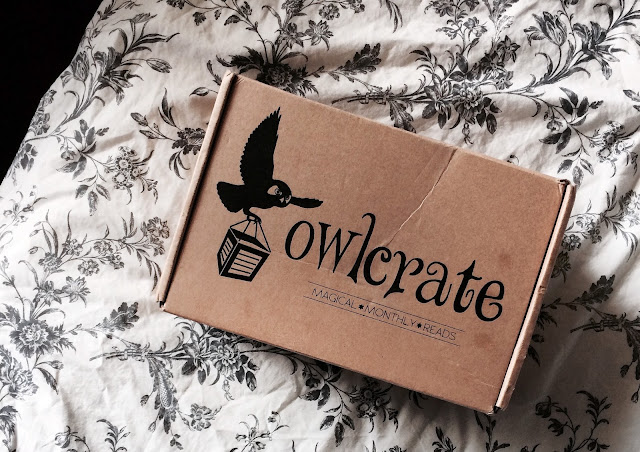 On March 16th I received a mail saying that I'd received a 1 month gift subscription to OwlCrate from Andrea L. Wells. Andrea is the author of The Violet Hour series which currently includes The Midnight Hour (a prequel novella) and The Violet Hour. I received her book for review last year and we've been in contact ever since. Andrea is definitely the sweetest author I've ever 'met' and I definitely consider her a close personal friend! I was quite blown away when she told me that she got me something for my birthday and I was over the moon when I realized that it was an OwlCrate!
So thank you very much Andrea! You've definitely made my month!

Spoiler's ahead, even though the majority have received their boxes now! 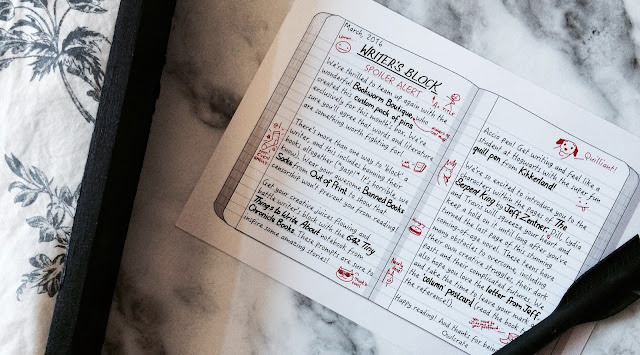 Even though I was spoiled for the entire box, because instagram, I was quite excited when it finally arrived a couple of hours ago! So, the theme of the month was WRITER'S BLOCK and since I've been in a blogging slump I thought it was quite fitting! I also saw one of the 'spoilers' on OwlCrate's instagram saying that it would include something from Out of Print and Bookworm Boutique! So, needless to say, I was very, very excited! 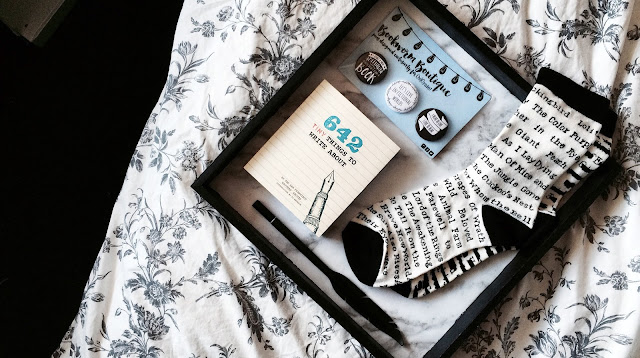 This is all the bookish goodies! We got some pins from Bookworm Boutique, see bigger picture below, banned books socks, a notebook with writing prompts and a quill pen!

I've been intrigued by the 642 Things to Write for a while but I've never bought it because I don't really write. I like to write once in a while though and I think this is perfect! It's a tiny version with 'tiny prompts' instead of the big version I've been intrigued by. I definitely think this one suits be better and I love the prompts! So creative!

I also got a pair of socks and well, bookish clothing, you can't go wrong with that! I love Out of Print even though I've never bought anything from them - but I hope to do so in the future. I love that they're mismatched so one is banned and the other is not, so fun!

Lastly, for right now, we got a quill pen and it's amazing! I feared a cheap pen but it's so nice to write with and I'm definitely going to buy some soon! It's from Kikkerland by the way! 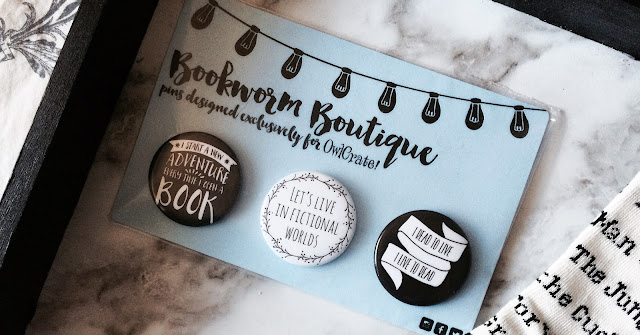 A nearer look on the bookish buttons or pins. The first one says; I start a new adventure every time I open a book - I think you can read the rest.

I don't really use these but I hope to come up with a great idea! Like using tote bags as pillow cases - that's an awesome idea!
However I really like them, so I thought a good idea would do them justice. 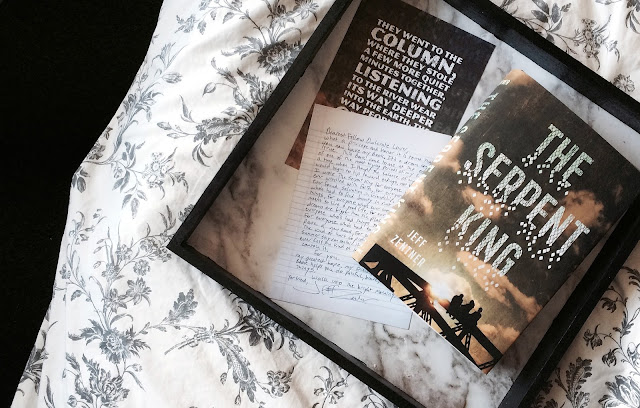 We of course got a book! This month it was The Serpent King by Jeff Zentner. I've been seeing it everywhere lately but I've not been that interested to be honest. I read the synopsis the other night though and, well, I still don't know what it's about! Read for yourself;

Dill has had to wrestle with vipers his whole life—at home, as the only son of a Pentecostal minister who urges him to handle poisonous rattlesnakes, and at school, where he faces down bullies who target him for his father’s extreme faith and very public fall from grace.

He and his fellow outcast friends must try to make it through their senior year of high school without letting the small-town culture destroy their creative spirits and sense of self. Graduation will lead to new beginnings for Lydia, whose edgy fashion blog is her ticket out of their rural Tennessee town. And Travis is content where he is thanks to his obsession with an epic book series and the fangirl turning his reality into real-life fantasy.

Their diverging paths could mean the end of their friendship. But not before Dill confronts his dark legacy to attempt to find a way into the light of a future worth living.


My biggest problem with the synopsis is that I'm in no way intrigued by the first part. It makes me not want to read this book. The middle part intrigues me and confuses me but definitely makes me want to read it and the last part is somewhere in between. I will give it a go though!

Together with the book we got a letter from the author and a quote 'postcard' kind of thing.

So, what's your thoughts on OwlCrate?
Posted by Unknown at 13:41