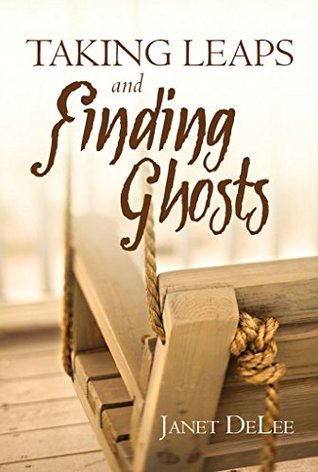 Baby boomer Ginny Lawther firmly believes it's never too late to leap into the unknown realm of possibilities - but she also knows it's tough to keep hope alive by yourself.

So she posts an open invitation to her Ideal Life Club in the local newspaper and is thrilled when she hears from four intriguing strangers who are also interested in pursuing their own dreams. But what begins as a seemingly straightforward self-actualization journey quickly turns into a puzzling, somewhat harrowing, adventure when the Ideal Lifers keep encountering ghosts along the way.

Hair-rising, hilarious, inspiring, and always surprising, Taking Leaps and Finding Ghosts follows the visionary quintet as they struggle to maintain their resolve, support one another, and solve the mystery behind these strange specters before they detail the group's efforts.

But can their hopes and dreams possibly survive all the unexpected challenges they will face?

Even though this book is about older people it reminds me of The Jane Austen Book Club, each of the characters have a life outside of the club which we'll learn about and they form a bond you can only wish for. I really enjoyed the relationships in this book and I enjoyed getting to know each and every one of the characters!

Our main, main character, Ginny starts an Ideal Life Club to help herself and others pursue their dreams. Taking Leaps and Finding Ghosts is about the 5 people in this Ideal Life Club and how they pursue their dreams with the help of each other. As the summary say; it's hair-rising, hilarious, inspiring and always surprising. It holds every emotion and it was a delight to read.

I think the characters are quite well developed, I would have liked to see some more of Lydia outside of the club since I love that she loves food and cooking!
I had not expected them all to be so old, but as it turns out, I have no problem with it. I couldn't really relate to any of the characters, but in this case it doesn't matter as much since I liked them all!

The Story
Even if the Ideal Life Club is what draws our 5 main characters together they each have a life of their own and it's an aspect I really enjoyed!

Seeing how they actually tried to reach their goal or dream was so inspiring! Even though the Ideal Life Club chapters is my favorite I definitely loved seeing how their life was outside of group!
This book holds so many different stories and different characters and oddly enough it's so easy to follow!
This story is definitely a character-driven story, so you'll find yourself at quite a loss if you don't like any of the characters. Though, I can't image anyone not liking any of the characters, even the least!

Even though the ghost part of the story is part of the title, Lee's life and maybe more of our character's lives it's actually not that big a part of the bigger picture. I can promise you that it's not creepy at all!

My thanks
I want to thank Janet DeLee for giving me the opportunity to read this book! It came at a time in my life where I didn't know I needed it and I'm grateful. Taking Leaps and Finding Ghosts helped me realize that even if my life doesn't turn out according to plan, it's never to late to pursue my dreams and it's definitely cured me of some of my fear for my future.