The Preacher by Camilla Läckberg 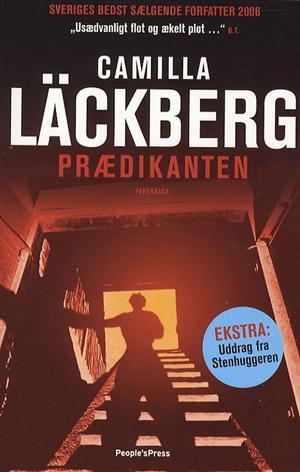 In the fishing community of Fjällbacka, life is remote, peaceful, and for some, tragically short. Foul play was always suspected in the disappearance twenty years ago of two young campers, but their bodies were never found. But now, a young boy out playing has confirmed the grim truth. Their remains are discovered alongside those of a fresh victim, sending the tiny town into shock.

Local detective Patrik Hedström, expecting a baby with his girlfriend Erica, can only imagine what it is like to lose a child. When a second young girl goes missing, Hedström's attention focuses on the Hults, a feuding clan of misfits, religious fanatics and criminals. The suspect list is long but time is short—which of this family's dark secrets will provide the vital clue?

Since this book is the second in a series, it will contain some spoilers. They do not spoil the plot only the relationship between Anna and Erica, Erica and Patrik and similar. Since this is a crime series, the crime is different in every book, there isn't any spoilers about the crime comitted in the 1st book.

Because I heard this as an audiobook I like it a bit more than the first book! It feels like you are listening to a CSI episode! It is great! Even though it makes the story that much more intriguing, it still had its boring parts.

The story line is quite interesting in this book, every other chapter is set in the present and then there is the other chapters - which is set in 1979, where the crimes where committed, you get to hear from the victims how they lived their last days, it is horrifying. But it gave the book an edge.

In this book Erica is pregnant! I love how sweet Patrik is in this book, and how their relationship develops, they are the reason I want to keep reading the series!

When it comes to the crimes that is commited in this story, it is quite gruesome. I cringed everytime we heard about the victims, they suffered until the end and I just feel so sorry for them.
There also were a bunch of plot-wists! Everytime you think you know what's going on, the story develops and you are left thinking what now? And that is really a nice twist. You can't put the book down because of those twists, so you just keep on reading and then there comes another and another and another.

I really don't have that much to say about this book, there aren't that many things I actually enjoyed about it, and the rest was a bit "meh".

When that said, I still don't enjoy the series that much, but I still love reading about Erica and Patrik... So I have to give this book 3 berries, just as I gave the first book 3 berries.

Have you read this series?
Challenges: Full House: Set in different country from you / TBR Pile
Resolutions: Read the books I already own / Review all the books I read
Posted by Unknown at 07:00