Today Mannah Pierce, the author of Cast Adrift and Foothold, is here to talk about when the characters take over. You can read my review of Cast Adrift here. Enjoy.

For forty years I wrote only for myself. My characters were free to do what they wished. They lived. They grew. A few of them had the luxury of appearing in different tales with conflicting storylines.

When I was writing about them the stories wrote themselves.

Then I hit fifty and made a resolution. No more writing without readers. I was going to use the internet to seek some out. The issue was, would they find my characters, some of whom had lived in my mind for decades, interesting?

I decided not to risk it. I had been watching the anime Naruto. One of the characters had caught my attention. I found a fanfiction site and set off; Masashi Kishimoto’s characters in my interstellar world.

It worked. I had readers. They liked the stories.

Three years later I decided it was time to stop writing fanfiction and go back to the real thing; my characters in my interstellar world.

I started afresh. These would be proper books. They would have beginnings, middles and ends. As well as the inter-character relationships, which come naturally to me, there would be conflict and action.

There would not be angst. I have my limits.

Each book would have 27 chapters each of which would be 3,000 words long, producing a book of 81,000 words, which was considered an acceptable length. I even had a plot summary for three successive books.

It started well enough. Then I was introduced to writer’s block. Was it the characters? Did I not care enough about them? Even writing about Masashi Kishimoto’s characters had been easier.

Then I realised it was the first time I had written a story knowing the outcome. My new characters were constrained.  If I let them off the hook to go their own way they would wreak havoc with my plans.

Then it happened. I gave the characters a glimpse of freedom and they were off. The plot went off the rails. New minor characters were popping up like daisies. One of the major characters developed a characteristic that will influence the outcome of the entire series.

I had to wrestle the plot back under control and point it in the desired direction. That took half a book. I had to work with the evolved characters, who now behaved differently.

It was a lot more enjoyable than writer’s block.

So now I oscillate between my natural writing style, where characters do what they please, and the organised, hard-headed approach advocated in all those books that give would-be authors advice. Occasionally, as I travel back and forth between those two extremes, I manage to make progress.

The truth is that I love it when the characters take control. I want them to be wilful. I write my best stories when they grab me by the hand and pull me into an unknown future. 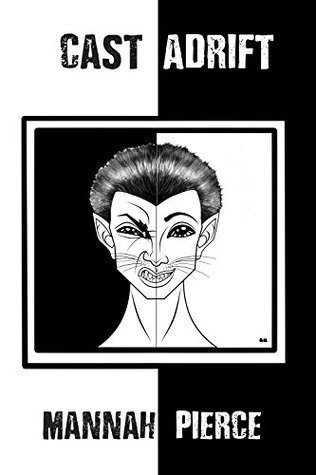 Mannah Pierce has been building her imaginary interstellar world of the far future story by story for four decades. At the age of fifty she decided to try sharing it with readers online and then, five years later, spurred by the diagnosis of a life-limiting illness, she wrote and had published Cast Adrift, her first fiction book.

In the everyday world, Mannah Pierce was a scientist and teacher but now works for a charity. She has been married for over thirty years and, predictably, likes cats.

Read more about her journey as an author here.
Posted by Unknown at 06:00