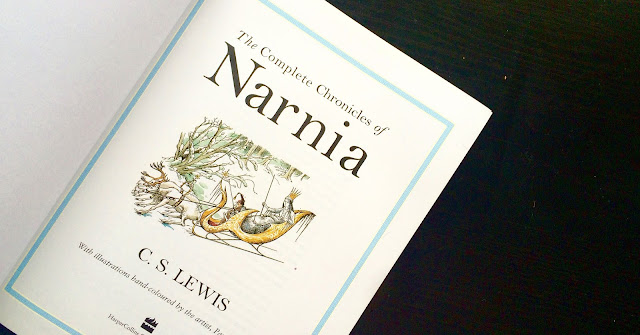 First Paragraphs is a weekly meme where I share the first paragraph, and some thoughts, from my current read or an upcoming book.

I have recently been reading in my gorgeous copy of the Narnia chronicles, hopefully I'll read the third book, The Horse and His Boy, today! Which is why I'm bringing you the first paragraphs of The Magician's Nephew, The Lion, the Witch and the Wardrobe AND The Horse and His Boy. As usual I'm going to share a few thoughts on each of the stories (books?). I actually tried reading this last year because I had to use it for a school project and I managed to read the first 3 and a good portion of the 4th - hopefully I'll get all the way through this time!

I absolutely love that we get a summary in the first paragraph of each story, so far at least, it's such a great way to write a chrildrens book!


The Magician’s Nephew
In this edition The Magician's Nephew is the first book, since that's what C.S. Lewis wanted. It's actually published as the 6th book in the series, but if you read it in publication order I strongly advice you to read The Magician's Nephew first. It basically tells the story of how Narnia came to be and how to travel from our world to Narnia - I'm so happy to have read this!

It's definitely a bit slower than The Lion, the Witch and the Wardrobe but the last 30 pages is full of background information about Narnia which is the main reason that I loved it.

This is a story about something that happened long ago when your grandfather was a child. It is a very important story because it shows all the comings and goings between our world and the land of Narnia first began.


The Lion, the Witch and the Wardrobe
I think we've all read or seen this particular one. And to be honest, the movie is actually quite good when it comes to follow the storyline! It's definitely one of the best adaptations by far.
This time around I had to read it for our book club, which is the reason why I'm reading it now, and since I'm in charge of snacks I thought I'd take inspiration from the book. I therefore wrote down everything they ate and well, they drink a whole lot of tea! But that's perfect!

I've read this so many times now and it's still my favorite.

Once there were four children whose names were Peter, Susan, Edmund and Lucy. This story is about something that happened to them when they were sent away from London during the war because of the air-raids. They were sent to the house of an old Professor who lived in the heart of the country, ten miles from the nearest railway station and two miles from the nearest post office. He had no wife and he lived in a very large house with a housekeeper called Mrs. Macready and three servants. (Their names were Ivy, Margeret and Betty, but they do not come into the story much.)

The Horse and His Boy
And now we've reach the one I'll hopefully read today. It's similar to the story of Moses (he's the one who was laid in a basket and sent down the Nile, right?). It's actually a great story.

This is the story of an adventure that happened in Narnia and Calormen and the lands between, in the Golden Age when Peter was High King in Narnia and his brother and his two sisters were King and Queens under him.


Have you ever read Narnia? Which one is your favorite?
Happy friday and happy reading!
Posted by Unknown at 12:16