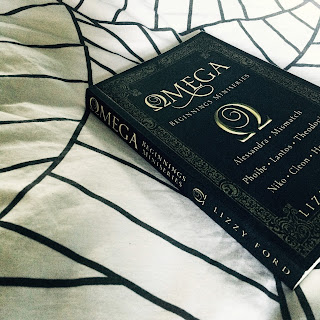 
A five-year-old child with an unusual gift starts a chain reaction when she reanimates a gargoyle, setting the stage for her rise to power a dozen years later as the Oracle of Delphi. Alessandra awakens the grotesque prince from slumber ...
Mismatch warns the child who will be queen of a family curse
Phoibe turns to her shadow friend for protection
Lantos delivers a message and mission to a priestess
Theodocia chooses serving her goddess over her gladiator boyfriend
Niko wins an audience with a member of the elite
Cleon grants a final favor to his betrayer
Herakles takes an oath to protect a special child with an unusual gift
The fate of the world rests in the hands of a child and the seven strangers who will become her allies and enemies. It's the beginning of the end - and not even the gods can stop what comes.

I read Omega in July of last year and I loved it! (Read my review here.) It's so intriguing, fast-paced and actionpacked - and very unlike all the other YA books with Greek mythology out there. When I found out about this series, which is a novella series which takes place before Omega, I knew I had to read it! I love novellas which give more knowledge about the story and/or characters and this one does both!

Omega Beginnings Miniseries contains the complete novella series of 8 novellas by Lizzy Ford! A thing I especially loved was the fact that they 'lead' the way to each other. For example; in Alessandra Mismatch is awoken - so the next story is Mismatch. Then in Mismatch we come across Phoibe so the next story is of course; Phoibe. It's a small detail but a detail which made the reading experience so much better!

A thing I usually trouble with is multiple perspectives, and since each of the stories are told from a different character, I feared that it would be a problem while reading Omega Beginnings Miniseries - but it wasn't! It was so easy to follow each character and I'm not sure why - maybe Lizzy is just that good? I really feel like she did an amazing job portraying each of the characters.

I'm not sure which story was my favorite, because all of them are great, but I loved Phoibe since we don't get that much information about why she doesn't talk in Omega (at least I don't remember if that is the case).
I was a bit shocked in Theodocia because it's a bit sexy and definitely in the New Adult section - even though Omega is classified as YA, a YA with older characters that is. I didn't expect them to tear each others clothes of and have sex - but that is what happens and it shocked me!

My biggest problem is that I feel like this series can't stand on it's own. Having read the 'original' book I knew how it connected with each other, but some of the stuff that happened in Omega Beginnings Miniseries I didn't quite follow - maybe it's because I just forgot some of the things that happened in Omega, but it definitely implies that you probably should read Omega before going into this one. I really don't know which one to read first..

Nonetheless, I devoured these 8 short stories/novellas and I definitely recommend reading them! This bind up of the series are also quite beautiful!
All of the stories are free on amazon if you're interested! They're quite short but enjoyable!
Posted by Unknown at 03:30

Email ThisBlogThis!Share to TwitterShare to FacebookShare to Pinterest
Labels: Dystopia, Review, YA