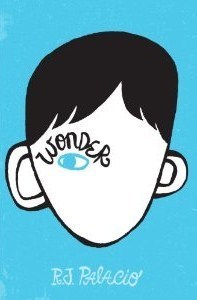 WONDER is the funny, sweet and incredibly moving story of Auggie Pullman. Born with a terrible facial abnormality, this shy, bright ten-year-old has been home-schooled by his parents for his whole life, in an attempt to protect him from the stares and cruelty of the outside world. Now, for the first time, Auggie is being sent to a real school - and he's dreading it. The thing is, Auggie's just an ordinary kid, with an extraordinary face. But can he convince his new classmates that he's just like them, underneath it all?

Through the voices of Auggie, his big sister Via, and his new friends Jack and Summer, WONDER follows Auggie's journey through his first year at Beecher Prep. Frank, powerful, warm and often heart-breaking, WONDER is a book you'll read in one sitting, pass on to others, and remember long after the final page.

I really, really liked this book! The characters were realistic, the storyline was great and overall a lovely book!

Lets talk characters first:
I really liked Auggie! He was so funny and sweet and I loved how he still had a sense of humour! He wasn't one of those complaining maincharacters that you sometimes come across. He has days where he is moodier than usual, but that is understandable, and don't we all have those days?
I felt really sorry for him at times because he gets bullied and all those people looking at him. It can not be hard growing up looking like him, but the fact that he is still quirky and dorky is amazing!

Summer! She is probably the sweetest girl ever! I love how she just went over to Auggie, sat down and started to talk to him - it was so cute! Especially because she ends up becoming one of his best friends, and to me that is amazing. She is so sweet towards Auggie and she totally gets him. I loved every part of the book she was in because she made Auggie so glad!

Jack Will is also one of Auggie's best friends. I love how he starts standing up for Auggie and chooses him over the "popular" boys. I also really liked that he wasn't rich! I sometimes feel like authors choose to portrait the "hero" or "saviour" as this rich guy that saves the "damsel in distress" which in this case is Auggie. Jack is the perfect friend for Auggie, and I love how Jack is the one copying notes and homework off Auggie.

Via is a great big sister to Auggie, she is just what he needs!

The different point of views:
I have heard a bunch of different things about this book, but I have never heard that you see the story from different POVs - which I am totally okay with, since it was an important aspect of the book, at least for me, and I LOVED it!
You get to see it from 6 different POVs. My favorite, besides Auggie, is Summer! It was way too short, but I loved it!
The different povs was amazing, you got to see how everyone else was affected by Auggie instead of just Auggie telling you about how he feels. It gave the story so much more depth, the povs kind of took the story to a whole another level! Especially the part that was seen from Via's point of view, because she is the "neglected child" because her parents had to take care of Auggie. You get to see how she deals with different stuff and how she actually feels about everything. At one point I started to dislike her, but she totally made up for it, because she cares so much about Auggie and I just feel like he couldn't have had a better sister!

What does Auggie actually look like?
He has ears, but they do not look like normal ears.
When he eats, he chews with the front of his mouth. It kind of look like how a tortoise eats.
He has had a BUNCH of surgeries, which is really sad! One of which was a jaw surgery where they took a piece of bone from his hip and inserted into his chin to make it look more normal.
Some of the kids says he looks like one of those shrunken heads.
His eyes are about an inch below where they should be on his face, almost to halfway down his cheeks. They slant downward at an extreme angle, almost like diagonal slits that someone cut into his face, and the left is noticably lower that the right one. His eyes bulges outwards and he doesn't have eyelashes or eyebrows.

The Auggie Evolution
When Auggie's parents told him that they think he should start going to school, an actual school, he was not that happy about it. He was actually really depressed because of it.
When he befriends Summer he starts becoming more confident, and then when he and Jack really start hitting it off, he blooms into this wonderful little kid.
Then in the end, after he has been in school for an entire year, he is normal. Of course not normal normal, but he doesn't think about his face anymore and he really enjoys going to school. He comes to accept who he is and that he is not only defined by his face but for his courage and friendship.

I loved this book to pieces, and I will seriously advice everyone, and I mean EVERYONE, to read this book. It teaches a valuable lesson and I hope that my siblings and middle-graders all over the world gets to read this book. If just to know that there are some people out in the world that doesn't have an easy life.

I have to give this book 5 hearts since it will forever be one of my favorites, and I will try to make every child read this book.

I shared a couple of teasers of this book for a Teaser Tuesday, click here if you want to read them.

Challenges: Full House: Theme / issue you think is important
Resolutions: Use the library more / Review all the books I read
Posted by Unknown at 08:00