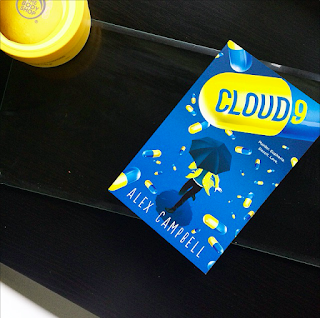 If there was a wonder-drug to make you feel happier, would you take it?

With no side effects, Leata is the perfectly safe pick-me-up!

What if everyone you knew had been taking it for years - your teachers, your friends, your family?

What if your dad was dead-set against the drug and the corporation behind it?

Not all questions bring the answers we need!

What if he died? What if you begin to suspect he was killed? What if you've lived your whole life believing in something - only to find out it's a lie?

Last year I read and reviewed Land by Alex Campbell, you can read my review here.

To be honest I didn't think I'd ever end up writing this review. This was definitely an anticipated read, but after I'd read 30 pages I was ready to throw the book across the room. I decided to put it down for the time being and pick it up another time - usually I don't pick the book up again. I picked it up a few days ago and maybe the time was just right, but the day after I'd finished the book and I'd definitely enjoyed it.

The narrator
Cloud 9 is told in a quite peculiar way. Even though there's alternate chapters saying 'him' and 'her' it's still told from a third person narrator although towards the end it switches back and forth between first person and third person quite a lot. Nevertheless, you can easily tell Tom, him, and Hope, her, from each other since the narrator somehow alters his voice. It's quite hard to explain, and I'm confused by it myself. The reason I wanted to tell you is because I find it odd that there's this illusion that it's told from two first person narrators through out the entire book even though it's actually a third person narrator so the two main character shouldn't actually have voices, but they do, somehow.

Leata, the wonder-drug
I thought I'd tell you a bit about the drug some people, or most people, in Cloud 9 take. Somehow it makes you happy but it's not antidepressant. It doesn't help everyone, you should preferably start taking it before you're in double-figures or something like that. Basically the younger you are when you start taking it, the better it works.
I think Hope's obsession with Leata, and I really think it's an obsession since she wears clothes from Leata and with their slogans, she's a Leata sponsored blogger and she just keeps pushing it on people! Her obsession with Leata is maybe a bit much, but again, I get it after I got to know her better. I still think it's a bit overdone though.

I find this pill quite intriguing and it's basically the main reason I wanted to read this book. I still find it quite intriguing but like Allegiant; once you know the truth, you can't ever see it the same way.

Characters, Tom and Hope
So, our two main characters are Tom and Hope. Hope is pro Leata and Tom is against. I definitely like that we see two sides instead of e.g. two people pro Leata or two people against Leata. We get to see what life is like with and without - and there's definitely a difference!

It was Hope who made me want to throw the book across the room. All she cares about is her numbers - that is the amount of followers or subscribers she has at any given moment. She's sooo shallow and she just annoyed me! When I read it the second time, because I started from the beginning once again, I was still annoyed with her, but I knew what was coming. After reading some more and getting to know Hope I understand why she is so shallow and I get it. I actually started to feel really sorry for her and definitely didn't expect that!
I think her character development is one of the greatest I've ever come across. I practically hated the Hope we meet in the beginning and I love the person she becomes in the end. She's definitely a strong woman in the end who knows how to stand up for herself and I've even come to admire her. Yes, it's that big a change!

Tom I'm a bit indifferent to. I like him, and on the other hand I feel like he's just a way to keep the story going. His dad committed suicide, or that's what the people behind Leata wants you, and everyone else, to believe. He wants to find out what it is his father was killed for and that's basically what drives the whole story. His mission, and soon-to-be Hope's mission, is to find this big side-effect, or something like that, to Leata.
Now, two days after finishing the book and with a bunch of notes I seriously have nothing to say about him.. Sorry.

As with every other young adult book, there's a love interest, and like every other YA book, you know it's going to be the two main characters. Even though I knew they were going to end up together, I still approve. They balance each other out and I love that they have a history. They knew each other when they were toddlers and when the story begins they haven't talked in years. Nevertheless, they're cute together and seeing them grow together was great!

The story
To be honest I really don't have that much to say about the story. It wasn't an unputdownable book, it wasn't that enticing and it really didn't keep me on the edge of my seat. I also felt like a lot could've been left out.
I still finished the book though, but I really don't think it's anything special. It was a great experience though - just like any other book.


Lastly, I just wanted to say that I won't keep any of you from reading it! I can totally see a lot of people loving this, since it is YA and reminds me a lot of a dystopian world or just basic sci-fi. It's not that it's not a good book - it's just didn't do it for me.