As Red As Blood by Salla Simukka 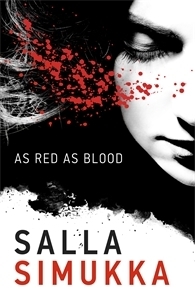 
Seventeen-year-old Lumikki Andersson is hardly your average teenager. She lives by herself in the city of Tampere, Finland, and has a firm rule to mind nobody's business but her own. But that rule is put to the test when she happens upon five hundred washed euro notes hanging up to dry in her school's darkroom, and it is shattered once Lumikki realises who owns them.

Caught in an increasingly tangled web of deception, corruption and danger, Lumikki finds herself navigating the Tampere's dark underbelly in the search to expose its shocking connection to the international drugs trade. Lumikki is smart, but is she smarter than a master criminal? Can she bring down the infamous 'Polar Bear' - or will she become another one of his victims?

The first part of a thrilling new Nordic crime series, AS RED AS BLOOD will have you on the edge of your seat until the last page is turned... and then some.

I've actually been offered this book for review a couple of times but I've declined every time, and I probably should have declined this time as well.
At first I requested both this and the sequel As White As Snow, I only received this one though and I'm quite happy that this is the case, to be honest.

The theme for this review is; I expected more.

I love fairytales and everything that has something to do with fairytales - fairytale retellings are probably my favorite thing ever, but this was just weird. It's not a retelling but it has a lot of references to fairytales - especially Snow White. Lumikki, the main characters name, is actually Finnish for Snow White. Even though I understood the references I was quite disappointed in that department - the title is perfect for a Snow White retelling.

I don't really know if I like the fact that it feels so 'global', there's Russian, Swedish, Finnish etc. For me it didn't really do anything; except that I have a thing for Russian, but I liked that it wasn't just English.

Now, to Lumikki. I'm sorry, but I don't like her. I figure the author want Lumikki to be mysterious - so we don't really know anything about her until we get a few facts towards the end. I didn't like the fact that I know next to nothing about the main character - she can be mysterious to other people in the book but not to the reader!
I've just realized that there aren't really any characters that I actually like in this book. I liked that we got to know Elisa, Lumikki's friend-to-be, better than anyone else but all the characters felt quite 'flat' because we don't know anything about them.

The story itself also disappointed me, I knew it was supposed to involve some sort of crime but it didn't really intrigue me or kept me reading to see what happens next. I found the story quite dull and I'm really disappointed.

To summarize; I didn't like the characters, I didn't like the storyline and I had expected more in the fairytale department. This book really disappointed me and I didn't even expect an amazing book, I expected a 3 or 4 star read - but it's not even close.