The Golden Braid by Melanie Dickerson 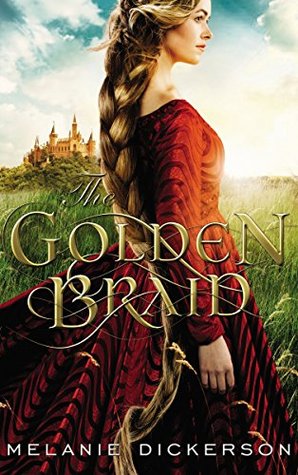 The one who needs rescuing isn’t always the one in the tower.

Rapunzel can throw a knife better than any man. She paints beautiful flowering vines on the walls of her plaster houses. She sings so sweetly she can coax even a beast to sleep. But there are two things she is afraid her mother might never allow her to do: learn to read and marry.

Fiercely devoted to Rapunzel, her mother is suspicious of every man who so much as looks at her daughter and warns her that no man can be trusted. After a young village farmer asks for Rapunzel’s hand in marriage, Mother decides to move them once again—this time, to the large city of Hagenheim.

The journey proves treacherous, and after being rescued by a knight—Sir Gerek—Rapunzel, in turn, rescues him farther down the road. As a result, Sir Gerek agrees to repay his debt to Rapunzel by teaching her to read. Could there be more to him than his arrogance and desire to marry for riches and position?

As Rapunzel acclimates to life in a new city, she uncovers a mystery that will forever change her life. In this Rapunzel story unlike any other, a world of secrets and treachery are about to be revealed after seventeen years. How will Rapunzel finally take control of her own destiny? And who will prove faithful to a lowly peasant girl with no one to turn to?

I absolutely love fairytale retellings and I basically requested The Golden Braid with the sole piece of information that it was a retelling of Rapunzel. What I didn’t know going into this story was the fact that there’s religion in it – which I’m really not a fan of in books.
The romance in the book is completely swoon-worthy – definitely the ending!

Our main character is Rapunzel, for once she’s actually called Rapunzel and not something else. She’s about 19 and her mother, Gothel, will not have anyone near her. They travel from town to town and always take off when guys or men start showing interest in Rapunzel.
Rapunzel has learned a lot of things from other people, she can throw knives, hunt and such but she has never learned to read and that is her biggest wish – to learn how to read.
I loved getting to know Rapunzel. Even though she’s grown up with a controlling mother she’s now old enough to stand up to her, although Gothel doesn’t know that she is standing up to her. Seeing Rapunzel becoming a woman with feelings for men instead of this shy girl who can’t even bear to look at a man let alone talk to him is wonderful and seeing her learn to trust is even better. Rapunzel’s character is so perfect and I loved her! She grows throughout the story and I loved seeing her grow into the woman she is.

On their travels Gothel and Rapunzel meet Sir Gerek. Gerek is arrogant and annoying but that change throughout the story and he becomes one of the most loving characters you’ve ever come across. He changes completely and seeing him realize what it is he actually wants is wonderful. I definitely held my breath at times when waiting for him to realize things.
We ofcourse know he’s going to be the love interest and Rapunzel and him are perfect for each other! The ending left me completely in tears!

I really enjoyed reading this story, the only thing that put me off is the religion. They read the Bible, fine, but they also keep praying and saying God will be there for them and God this, God that. I really don’t enjoy books with religion in it and I really tried to look past it in this book. Lucky for me the swoon-worthy moments were completely free of religion!
I had no idea I’d enjoy a fairytale retelling so much when it didn’t involve magic, supernatural beings or prince and princesses at all. It had none of the things which usually makes a fairytale but I enjoyed it anyway!

After a long debate I’ve decided to give The Golden Braid 4 stars. I really enjoyed it and I probably would have given it 5 stars if it wasn’t for the religion part. It is such a captivating story and when I find out whether Melanie Dickerson’s other books also have religion in them or not I’ll probably read them!
Posted by Unknown at 05:00