Anything That isn't This by Chris Priestly 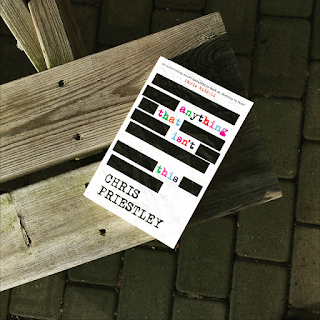 Seventeen-year-old Frank Palp lives in a grim little apartment, in a grim little building, in an exceedingly grim (and rather large) city. Cobbled streets and near-destroyed bridges lead one through Old Town and Old New Town, and war-damaged houses stand alongside post-war characterless, concrete hutches. Most people walk hunched over, a habit from avoiding snipers, but others are proud to stand tall and make the world take notice . . . This is a city full of contradictions, and Frank is no exception.

He mostly hates his life, he definitely hates the ludicrous city he is forced to live in and he absolutely with complete certainty hates the idiots he's surrounded by . . . and yet he is in love. A love so pure and sparkling and colourful, Frank feels sure it is 'meant to be'. His love is a reward for all the terrible grey that he is surrounded by - which would be great, if the girl in question knew he existed. And then one day, the perfect sign lands in his lap. A message, in a bottle. A wish, for 'anything that isn't this'. The girl who wrote this is surely his soulmate - and now he just needs to find her.

"A Kafka-esque nightmare of a story... about love"

To be honest I wasn't totally happy with this book. If I'd borrowed it from the library or received it as an ebook I probably wouldn't have finished it.

In Anything That isn't This we meet Frank and his family; mom, dad and sister Petra. He is 17-years-old and he's just finished high school. Frank is quite a depressing main characte; he don't want to be like 'everyone else' and work at the ministry so of course he end up working there.
He's also in love with the popular girl; Olivia Pavillus, so of course he end up kind of stalking her (cycling past her building three times a day).
Frank has a best friend; Daisy. They've known each other forever and even have matching scars from when they were younger. We don't really see much of Daisy after the initial couple of chapters, she reappears in the end though.

I began reading this randomly one night and I had no idea what was going on in the first 100 pages or so! The story begins with the family eating dinner and then suddenly there's this Student who's just observing them and they shouldn't talk about him or to him - it's weird and I kind of liked the quirky aspect of the story, this quickly disappeared though.
It took me a while to actually get into the story and understand what was going on. It was better when I was confused though.

I thought about putting this book down quite often which my initial remark clearly shows. It's quite a bleak and depressing read; I literally visualized everything in black and white, no color!
I don't like calling a book boring, because something or other usually happens. This time I have no other word than boring to fit the book.. I was indifferent to anything that happened. The ending is quite action-packed, opposed to the rest of the story, but nothing really happens!
Frank goes to work, maybe get a drink or two, maybe spend a little time with a girl, then he goes home. That's a big part of the story summarized in a single sentence. Does it sound interesting? Not really.

I really liked that Frank is in to literature though, he loves reading and he even writes stories on a typewriter! I think that's the most positive comment I can make about the content of this book.

To be honest I find it quite odd how the longest book I've ever received from Hot Key Books is the book where the least happens. It could've been without at least 100 pages!

In the beginning I found the whole thing rather interesting and funny! Hot Key Books, the publisher, puts this circle on the back showing what the story holds. I may have laughed out loud when I read the circle for this book; 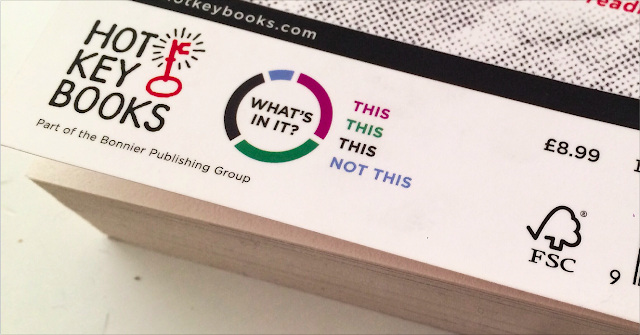 I love the cover! It fits the story nicely since they don't want people to read the 'old books'. They should read the books that the ministry have written so they literally rip out the ending of the 'old' books. It's also quite the pretty cover to be honest! The spine is not too bad either. Everything about this book intrigued me, especially the back - which usually never seems interesting to me! 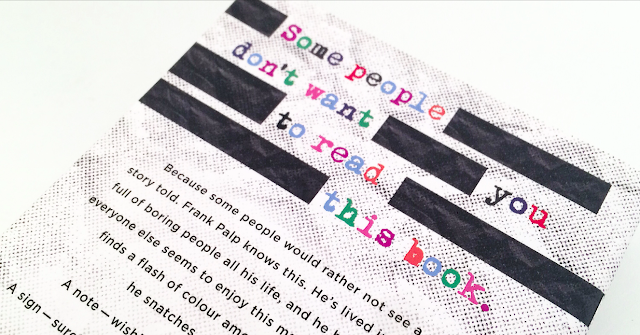 So, everything about the book, except the story itself, I actually love. It's not like my expectations were that high, because I had no idea what I was going into, but it still fell flat!
Since I managed to finish it I've given it a 3 star rating.. Even though I've thought about giving it a lower rating a couple of times now.

Lastly I want to mention that I see the potential with this book, I can imagine it becoming very popular - especially with the older young adults. I just think it needs to cut out all the things that are unnecessary.
Posted by Unknown at 17:55