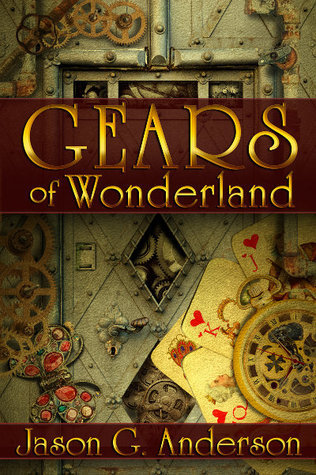 James Riggs lives a normal life with a mind-numbing job, an overbearing boss, and a demanding fiancée. Then he witnesses the murder of his best friend.

Saved from the murderer by a strange man in a white suit, James is cast down a hole and into a world he always believed was a kid’s story. Wonderland.  But things have changed since Alice’s visit.

The Knave of Hearts has seized the Heart throne, conquered all of Wonderland with his steam-powered technological marvels, and rules the land with an iron fist.  Aided by the Mad Hatter's daughter, James journeys to discover why he has been brought to Wonderland and how the tattoo on his arm could be the key to Wonderland’s salvation—or its destruction.

The first thing I have to say about this book is that it's kind of short - I know 200 pages aren't that short, but if it had been longer the story would have had the space and time to evolve into something even better. Don't get me wrong - I really enjoyed this book, I just wish it was longer, more detailed and that the relationship between James and Kara would have had the time to bloom.

I think the story is very intriguing, most of us already know about the incredible wonders of Wonderland and this story, somehow, takes that world to another level.
I have never read a steampunk book before, but I dare say that I quite enjoyed it. I liked that only the first chapter took place in "our" world and the rest of the book is set within the borders of Wonderland.
I loved how the characters from the original story was human's in this one, but still had some of the quirkiness that identifies them as a creature of Wonderland. I loved the Hatter (I always love Mad Hatter) I just wish we saw more of him - but he's not that important in this story, so I will let it slide.

I loved the fact that this wasn't a story about love. I love reading love stories but I also love reading books with only a sprinkle of love instead of a whole pile of it. I loved that it took a while for James and Kara to for starters realize it and let alone act on it.

I gave this book 3 hearts since I enjoyed it quite a lot, but still felt a little something was missing.

This is the first chapter from Gears of Wonderland. It’s the only chapter that’s set in “our” world, and introduces the main character (along with his not-so-nice fiancee and boss).
For what felt like the hundredth time, James glanced at the clock on the far wall of the office. The grinning Cheshire Cat plushy sitting on top of his monitor appeared to mock him as he again confirmed it was past seven o’clock.
He cursed his luck as he typed. Officially, he’d started his vacation two hours ago. Three hours ago, if you counted his plan to leave work early so he could be home in time to finish packing. But as he had shut down his computer, his boss, Ian, had dumped a pile of work on him, work that he’d quickly discovered were reports Ian should have completed.
The thought of leaving them undone and making his boss do his own work had been tempting, but he’d quickly pushed the idea aside. He didn’t want to cause any trouble.

This giveaway is open internationally!

a Rafflecopter giveaway
Posted by Unknown at 07:00