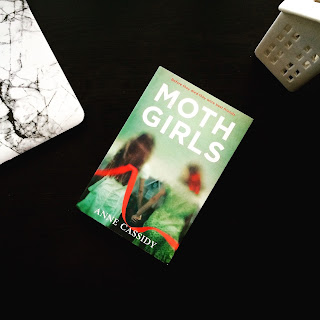 Helplessly drawn like moths to the light, two girls go missing in an evocative and gripping tale . . .

They called them the Moth Girls because they were attracted to the house. They were drawn to it. Or at least that is what is written in the newspapers that Mandy reads on the anniversary of when her two best friends went missing. Five years have passed since Petra and Tina were determined to explore the dilapidated house on Princess Street. But what started off as a dare ended with the two girls vanishing. As Mandy's memories of the disappearance of her two friends are ignited once again, disturbing details will resurface in her mind.

An emotional thriller that explores our deepest, darkest fears. How far would you go to find your two lost friends?

I love thrillers but I'm somehow always disappointed in YA thrillers. This one didn't stand out from the crowd. I apologize in advance for my review, but Mandy touched some nerves.

It's not like I had high expectations for Moth Girls, I was expecting a good page-turning thriller and what I got wasn't exactly that. I read it in two sittings, but after I'd read 100 pages I put it down and didn't think about it for nearly a week and then I remembered that I should probably go ahead and finish it. Funny thing is that I didn't remember that much about the story when I picked it up again - nothing was memorable.

I'm sitting here trying to write a review and I literally have nothing to say about this book. I am quite indifferent to it so looking for words for a review is like trying to grab the air - quite pointless. I'm going to try anyway since I've finished it and feel like I should do my best!

Mandy, Mandy, Mandy. She's our narrator and the most annoying person I've come across this year. She keeps blaming herself for their disappearance - which she really shouldn't. She keeps blaming herself for not telling anybody they went into the house - which she probably should have done, but done is done. And she keep on living in that time - she tries getting new friends but she gets easily attached and, well, you know how that ends.
After learning more about the girls' friendship I don't know why Mandy even bothered befriending them - or rather tried to. Petra has a bunch of problems at home which result in her being a bitch for a lack of better word. I understand her behaviour against Mandy to a certain degree but seriously? It gets old quickly. Tina tries to be friends with both of them and ultimately choose Petra and we know that didn't go well.
Mandy was never actually a part of their little group but she've grown up believing that she was. I thought the three of them were actually best friends and then she, Mandy, was left behind to pick up the pieces. That is not how it is. She was always on the edge and she chose not to go with them and she blames herself for years afterwards. I want more mature and confident characters in YA, not these delusional ones I keep reading about!

Moth Girls is a quite mediocre read. I found the characters lacking in almost every way and I wasn't at all interested in the story. It wasn't exactly predictable but it wasn't captivating either. I was a bit disappointed with the ending since I'd feared that it would end the way it did. The only thing I can say without spoiling everything for you is that I found Mandy's, our main character, actions quite childish and she should've told someone!

I believe I've gotten the point across; I'm not happy with this book.
Posted by Unknown at 07:00