Fish Out of Water by Natalie Whipple 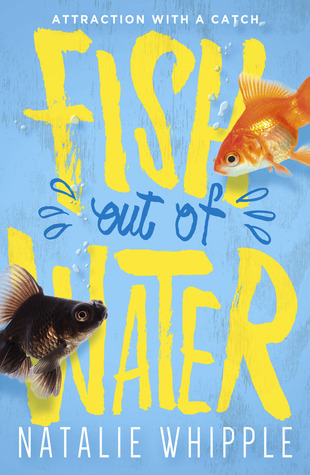 "People like to think fish don't have feelings - it's easier that way - but as I watch the last hubby squirm in his bag, his eyes seem to plead with me. I get the sense that it knows just as well as I do that bad things are on the horizon."

Mika Arlington has her perfect summer all planned out, but the arrival of both ger estranged grandmother and too-cool Dylan are going to make some very big waves in her life.

I had a feeling that this would be targeted toward the younger section of YA, but it's not and I found myself enjoying it immensely.

Our protagonist Mika is 17 and she has a thing for fish - a quirk I quite like about her. I like that she's as nice as she is, that she feels guilty when she is guilty and not just brushes it off. I like that she is so invested in her parents' work and that she was going to work with them over the summer.
I really enjoyed her relationship with her parents, it felt real and not forced and I like that they are so close. Another relationship I enjoyed immensely was the one between her and her friends - which also felt real. It's quirky and fun and I can definitely recognize some of my friends in Olivia and Shreya.

The relationship between Dylan and Mika was probably the one I enjoyed the most.. Sorry. I love how they don't even like each other in the beginning and that she just kept smiling even though he irritated her. I also found it quite funny when she wanted to buy a fish and he didn't know how to catch it. Watching their relationship bloom and unfold is probably one of the things I enjoyed the most - it goes from 0-100 in a while instead of immediately. They get to know each other better and what wasn't even a real friendship to begin with turns into love. There is definitely a lot of swoon worthy moments in this book!

When I began reading this book I was not expecting it to revolve that much about fish, but it does and it turns out that I quite enjoyed it. Learning about fish this way was definitely not boring, Mika's devotion to them is just inspiring and I may want to read more about fish now - who knew they were so interesting?

This book is a roller coaster ride that hit me right in the feels! I laughed, I got butterflies and I was on the verge of crying. Not many books hit me like that but Fish Out of Water definitely did! It's a remarkable read and a quite interesting one as well!

Something I found quite funny was that the author, Natalie Whipple, apparently killed 3 goldfish while researching this novel - it gets me every. Single. Time. I mean 3 goldfish?
Posted by Unknown at 08:30