The Rise and Rise of Tabitha Baird by Arabella Weir 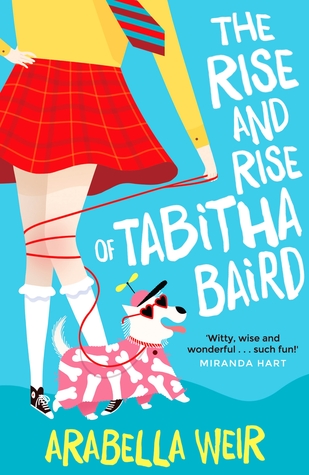 When thirteen-year-old Tabitha Baird's parents split up, she moves with her mum and brother to live with Gran in London. (Gran who talks to - and, worse, FOR - her knitwear-adorned dog . . . Oh, the shame!)

And Tabitha has to start at a new school where she is determined to be the coolest, most popular girl, whatever it takes. But how will she keep her friends from finding out about her incredibly NOT-cool family?

I will keep this short to avoid spoilers

I just finished this this weekend and it was hilarious. I found Tabitha and her little brother, Luke, so weird and funny that this is a book you can't help but enjoy and, at times, laugh out loud - which means that this book is not bus- or train reading material, unless you like when people look at you funny.

This book is definitely targeted towards a younger age group but I found it funny nonetheless. Tabitha is this quirky character that have a hard time finding her place and ends up being the class clown and a real brat at her new school. I could definitely recognize myself in Tabitha sometimes, specifically about not fitting in and being bullied.
My favorite thing about this book is probably the relationship between Tab and Luke, it is so real and funny, it doesn't feel fake - which I generally think relationships between siblings often feel in books.
I also enjoyed the relationship between Tabitha and her two new friends Emz and A'isha. I liked that A'isha was a muslim, just to get some diversity in there, and I enjoyed that they were there for each other even though they're not that old. I also really liked the part where they befriend the 'nerd' Grace, she was really cool and I liked that they all thought she was a nerd and then at the end finds out that she's actually pretty cool.
The ending is perfect - a real 'feel-good' ending.

I flew through this book and I laughed quite a few times. All in all I think it was great, but at the same time it was missing something.