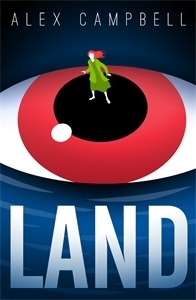 The sea rose. Civilisation was wiped out, countries drowned. Out of the ashes of a desperate refugee camp, a new society was born, with a new place to call home: Land. Trapped by an aggressive sea, its citizens were bound to rules that saw the weak removed, marriage and children by approval only, and designated work for all. All for the greater good......

Decades later, and seventeen year-old Christy's life is on the cusp of irrevocable change. She has become eligible for the Pairing, a carefully selected marriage of political and social convenience where romance is out of the question. Her grandmother, Cons, has also reached a significant age - sixty-six: soon the Selection Truck will arrive to take her away forever.

Christy’s only hope for protection lies with her missing rebel father…..but nothing goes as it's supposed to. As Christy finds a Pair who might offer a new opportunity for love and security she also uncovers a destiny that has been hidden from her; truths that have been disguised as childhood lies. With Cons’ life under threat, Christy is forced to face a whole new world, one where she must choose between those she cares about and the greater good….a new life where she must play the reluctant rebel, the revolutionary, the lover.....the assassin.

I really enjoyed this! It feels like a mash-up of a bunch of my favorite dystopias!

Let's start with talking about the world. The place where they live is called Land - hence the title - and it's only a small part of the world - not the entire world. They can't leave since there's water all around. I think Land is, hands down, horrible and this is why;
Land decides everything, whom you get to marry, who get's to have children - and when, which job you get, when you die and so on. Something that really scared me was probably that women who got pregnant without being allowed to either dies or gets sent to the brothels
There is a lot of rules and not that much freedom - if any. I hate Land because it is too controlled I mean, you even have to wear certain colors so people know which part of the hierarchy you belong to.
I think the world is leaning towards our more typical dystopian world since it has all the rules, but I also think it stands out because it's sitting in the midst of water without any options for leaving - I don't think I've read a dystopian novel with the world surrounded entirely by water.

I also loved how this book starts out - naturally - explaining the world, how it is as it is and why. I loved that the world building comes in the form of a story about Cons life. We are therefore naturally plunged in and we get to know all the important things about Land before we actually start reading Christy's story.

In the beginning I really liked Cons, Christy's grandmother, then that totally changed when all the plot twists came along. Now I'm left not knowing whether I like her or not since I understand a bit why she did as she did, but I also hate her for doing it.
Chrisy I like - except for her inability to make choices, she just let others pull her along and letting them choose for her. She missed a bit of back-bone but it came through in the end!  I loved the fact that she is an assassin - I've actually never read a book with assassins, so it was totally new for me and I liked it! I think it makes you sit on the edge of your seat or "makes you hold your breath without knowing". Nonetheless I think it was quite intriguing and I liked that she wasn't this stone cold assassin. Christy had feelings, she was nervous when killing a human being.

I really enjoyed reading about Christy and Land - and I enjoyed having this big of a story in a standalone instead of a trilogy, it made it much more fast-paced and enjoyable.

And before we end this I have to say that I really love the cover, I think it captures the story wonderfully and I absolutely love that the main character, Christy, has red hair, like me. I also love that it's so colorful opposed to just being black with a few colors thrown in.


I little extra: I talked to the author, Alex, and got her to describe this book in three words and she came up with so many great descriptions! Here's some of my favorites:


Death becomes destiny
Control is power
Pain that I am
Lies hide choices
Posted by Unknown at 16:37