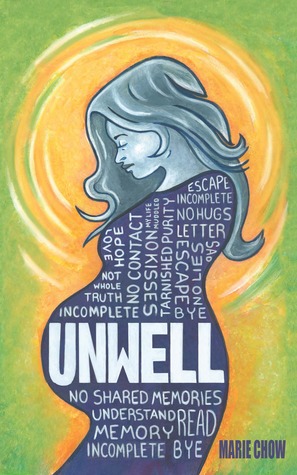 
How do you tell your child that you won’t be there when they grow up? UNWELL is the raw, honest story of a mother who writes to her unborn child, sharing her decision of choosing not to be a mother. She doesn’t take the road to abortion. She decides to give her child a fighting chance in life, without the angst and drama that’s shaped her own bittersweet life.

With a poignant lack of emotion, the young mother shares her life story. As the child of Asian parents who moved to America early in her life, the mother shares how her life disintegrated after her parents’ divorce. From upper middle class suburban to sharing her mean aunt’s house to a one bedroom apartment in a shabby neighborhood, this mother endures the indignity that comes with the change of status. From her father’s absence to her mother becoming a married man’s mistress, her story reads like a tragic Victorian novel set in the 21st century, but that’s where the similarity ends—she is definitely not a shy country miss and she certainly did not take the easy way out.

This amazing story chronicles the life of a woman who fought for everything she got, faced her demons and made the hard choices. Her fortitude and candor are disarming, her avant-garde views strangely endearing. You’ve never read a book like this and probably never will again. Get your copy today and take the literary journey of a lifetime. Through this glimpse into the life of a woman of integrity, sacrifice and love, you’ll feel her pain, live her failures and cheer for the meager joys that come her way. But the one thing you’ll never do… is forget her. Or her story.

I loved the plot, the sentence(s) that really captured me and made me want to read the story was probably: "How do you tell your child that you won’t be there when they grow up? UNWELL is the raw, honest story of a mother who writes to her unborn child, sharing her decision of choosing not to be a mother."

I really enjoyed it, even though it reads a bit like a diary there still is that twist of her telling all this to her unborn child - for which she is basically leaving. Some times I had a hard time keeping my focus and just read this book - because since you don't have to think at all while reading this book (which is a nice change once in a while) your mind is free to wander elsewhere. I still enjoyed the book though, I liked that I got to know our main character a different way than you normally do. I loved that you get to know her through hearing about her life and through the choices that she'd made - not through someone else's eyes or even her saying: I'm good at.... I like... My favorite dish is...

From the start I had a problem with her mother, she is a bit over controlling and I just felt like she had no regards for her daughter. There also was the aspect of her saying that if she had to choose between her (the daughter) and the man she had an affair with, she would actually choose the man - well, she says "don't make me choose" in a very harsh way, so... But I just didn't like her.

I hated her father, I might as well say it now because you aren't going to like what's coming. He left them with nothing - not even money enough so they could have a normal life. He took everything - even the house, because he should have a new life.

I liked hearing about her childhood, how she hadn't had a "normal" one if you can use that word. I enjoyed hearing what she, as a child, thought about living with their cousin and sharing a bed with her mother because she couldn't afford more than that. The fact that she almost tell you about all that stuff with zero feelings make you wonder just how much she hated her childhood - if she even hated it.

aah, Yafeu I love you! He is literally the sweetest person and he is just wonderful. He is so funny, witty, clever and he is just the perfect guy. In a way he remind me of my boyfriend - yes my boyfriend is a sweetheart. But I feel like this is a guy most girls would love to be with, he doesn't force you to anything, he helps you when you need the help, he is there for you no matter what - he just want you to be happy.

All in all I did enjoy this book, just not as much as I had hoped. So I gave it 3 hearts, a great one-time read!