The Monkey's Secret by Gennifer Choldenko 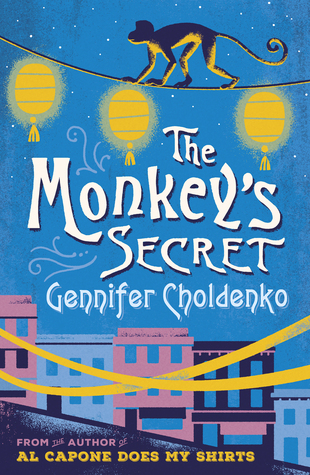 A segregated town, a hidden boy, a courageous girl - and a mystery in desperate need of solving.

San Francisco, 1900. Thirteen-year-old Lizzy Kennedy is not like the other girls in her town. She'd much rather be helping her doctor father with his patients than be stuck in frilly dresses and learn how to dance - but unfortunately for her, society (and her Aunt Hortense) has other ideas about what is 'proper' for a young lady. This includes not poking your nose in other's people's business - but then Jing, their beloved housekeeper, gets stuck in the Chinatown quarantine. Fear rules San Francisco - fear of the Chinese, and mostly fear of the plague rumours that circle them. Lizzie knows she has to help Jing, whatever the warnings. But what she doesn't expect to find is a strange boy hiding in Jing's room.

The boy is called Noah. He says he's Jing's son - although Lizzie's never heard of him - and although he's escaped the quarantine, he can't risk leaving the house in case he gets rounded-up too. Lizzie wants to investigate, but it seems her questions only get people riled up. Is there really plague in San Francisco? What have the Chinese got to do with it? Just what or who is the mysterious 'monkey' - and what has his secret got to do with anything? Lizzie will have to use all of her courage, instinct and cleverness to unravel the mystery of the monkey's secret, save Jing, Noah and Chinatown - and maybe even her change her own destiny.

The Monkey’s Secret takes place in San Francisco in 1900. Our narrator is the thirteen year old Lizzie, or rather Elizabeth, Kennedy.
Suddenly Chinatown is quarantined and their cook, Jing, is captured inside. They fear it’s the plague and no one is going in or out.
While Jing is gone she finds out that he has a son named Noah, Noah is hiding in Jing’s room during the quarantine and he and Lizzie quickly become friends.

Lizzie is a very peculiar girl, her dad’s a doctor and she likes to go on calls with him. She one day hopes to be a doctor herself and she knows a lot of stuff about illnesses and the human body in such a young age. Lizzie doesn’t like dressing up but she loves to read and write poems.
I think Lizzie is such a great character! I haven’t found a character in a childrens or middle grade book like her in a long time and she’s just how I like my characters in those books! She’s so nosy and she doesn’t take no for an answer!
Seeing this lonely little girl begin to make friends was great! She definitely grows after getting friends!
Noah is 12, the cook’s son and knows a lot more about life in general than Lizzie. He’s had a hard upbringing since he’s Chinese and he is therefore prejudiced. Noah and Lizzie’s friendship is such a cute one! Lizzie does everything she can to see him whenever the coast is clear, she makes sure he has food while Jing is gone and he’s her first friend!
Lizzie’s other friends are Gemma and Gus, you can clearly see why Gemma and Lizzie are good friends. They are both peculiar and up to no good - Gus too. They’re the perfect friends for each other and I think Gus’ crush on Lizzie is adorable!

The story didn’t impress me that much. I enjoyed getting to know the characters and I found myself liking all the characters in the end but I really don’t have that much to say about the story. Not a lot happens before the ending to be honest and I don’t want to spoil that for you – but it wrecked me!
I think my favourite part of the story was when Gus’ asked Lizzie to the cotillion and the actual cotillion – so cute!

I was really intrigued by the synopsis but for me the book fell a bit flat. Even though I enjoyed Lizzie and Noah, Lizzie and Gemma, Lizzie and Gus and just Lizzie basically, I wasn’t that impressed. I was really looking forward to reading it and I wish more of it was actually set in Chinatown. There’s a lot of talk about Chinatown but only a very small part of the book takes place there.
So, the characters are great but it’s basically the story that’s a let down! I enjoyed it though and gave it 3 berries out of 5!