The Beautiful and the Cursed (The Dispossessed #1) by Page Morgan 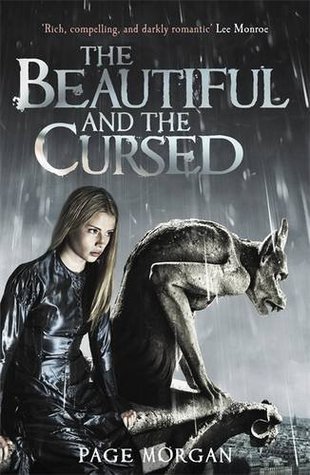 
Ingrid Waverley is a young woman to be reckoned with. Faced with her brother's mysterious disappearance after an abrupt move to Paris, she is determined to discover what has happened to him. Soon she and her sister Gabriella are drawn into a Parisian underworld more terrifying than they could ever have imagined, but watching over them are two impossible (and impossibly handsome) young men. Luc is a 'Dispossessed', an ancient gargoyle whose sworn duty it is to protect the humans who inhabit his abbey. Nolan has secrets of his own too. He is a member of the Alliance - a shadowy group dedicated to keeping Paris safe from the demonic forces that threaten to destroy it.

Secrets, danger and hidden powers stalk the girls in this beautifully imagined paranormal romance that will keep readers gripped from beginning to end - and one thing is for sure - you'll never look at a gargoyle in the same way again...

I mainly requested this book because of the gargoyles, I've never read a book which was about gargoyles and I couldn't pass the chance - and I'm quite glad I didn't.

Weirdly enough The Dispossessed series encompass a bunch of things I dislike in books; angels vs. demons and love triangles -  just to name a few - but I ended up loving it anyway. Page Morgan really did a number on me.

There's a hierarchy in the book that you have to make sense of; first we have God, then us humans, then the angels, the gargoyles and the demons. The gargoyles are humans who have committed a sin - killing another human being - and then turned into gargoyles to protect humans. The gargoyles are practically slaves of the angels and they're not treated well. I love the idea that instead of being above us, the angels are below us - this created a different angle that I seem to love.
There's also a group called the 'Alliance' which is basically this society or group of demon hunters

Characters
We have 3 siblings, Ingrid and Grayson - the twins, and their slightly younger sister Gabriella or Gabby. Grayson is kidnapped and Ingrid and Gabby is set on finding him - which makes for a delightful tale! We also have Luc - the gargoyle who has to protect the Waverly family, Nolan Quinn and Vander Burke - the Waverly sisters' love interests.

Gabby is quite the character, in the beginning I disliked her quite a bit but in the end she turned out to be such a strong and admirable character.
Ingrid I couldn't figure out in the beginning but she's also a lovable character. She's intense in a good way, she stands up for herself and she is definitely not a damsel in distress. Yes, she freaks out at times but you would too if you were Ingrid.
Luc, I love Luc. He's trying so hard not to like Ingrid and I loved reading about that struggle.

Setting
I can't read a book set in Paris and not mention it! When I requested it I had no idea that it would take place in Paris (my favorite city of all time) in 1899 (a time-period which I love). I literally turned the first page and started squealing when I saw that it was set in 'Paris, 1899', if I'd known I'd probably requested it no matter what it was about.
Even though the town or setting doesn't matter that much in this book, there aren't really any descriptions of the town and they're only going to certain places in Paris, you still know that you're in Paris and that's enough for me. - I also enjoy the few French lines in the book, brings a smile every single time.

I was sure that this book was going to disappoint me, but this is just one of those books which seems so darn interesting that you have to read it! And even though this book is about angels and demons - which I didn't know at the time - I still ended up loving it.