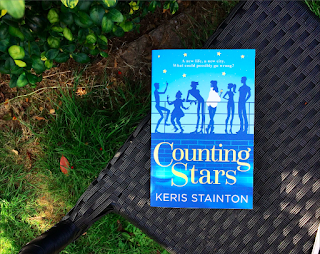 Six 'friends', one flat, big dreams... what could go wrong? When eighteen-year-old Anna leaves school and moves to Liverpool, she feels like her life is finally beginning. She's landed her dream job at a theatre, and she's moving into an exciting (if not slightly run-down) flat on a buzzing street lined with shops, bars, and buskers. Best of all, her new flatmates are kind, welcoming and a lot of fun - what more could she ask for?

But although her new life is fun, it's also a little overwhelming. Anna's job quickly falls through, and then she realises that although her new friends are great, they're also a little mixed-up... and it's not long before Anna starts using her blog to talk about her experiences, from the hilarious to the ridiculous to the little-bit-scary. But when Anna spills a bigger secret than she can handle, suddenly the consequences are all too real. She'll have to prove she has the mettle to make it in the big city, or risk losing everything she thinks she wants.

This is going to be quite a short review since I didn't enjoy the book that much.

I was looking forward to reading Counting Stars. I might have a soft spot for books about blogging or bloggers in general and this looked like a good one! In a sense it is, but the blogging aspect... To be honest it's non-existent. Anna, our main character, is not a blogger - she's a vlogger. It's not the same thing! I believe the blog aspect is supposed to be the transcripts of her vlog and they're not that interesting or good.

I feel like I'm quite negative so far and I'm quite sorry for that, but when you expect something, and what you get is something entirely else, you'll either be happily surprised or disappointed. And, unfortunately, I'm on the negative side of that scale.

As stories go, I wasn't immediately grabbed by this one. I kept picking it up and putting it down and never reading more than a few pages. Mainly because the story takes a while before it gets going and, while it's great when it finally picks up and things start happening, it's really not as good as I'd hoped.

In the beginning I liked our main character Anna just fine, she's a vlogger and she's finally ready to move out and live on her own - with some friends in a flat, of course. As the story progressed I came to dislike Anna more and more. I found her quite shallow and naive to be honest, she's not really my cup of tea!

I'd expected that Anna would be the protagonist of the story since she's supposed to be the main character but that's not the way the book is structured. We practically get to follow the 6 friends sharing a flat and Anna through the entire book! I quite liked that since I wasn't happy with Anna and I definitely needed those chapters without Anna!

Another thing; I'd expected a YA read and I felt like I got a NA read. There's actually sex scenes in the book! I was quite baffled and the story could definitely have been without but it's not that bad to be honest. In a way I'm thrilled it's mature or older YA instead of just YA since the characters are more mature but it would be nice to know that there's going to be sex (like explicit) in a book!

So, that was that. I really just want to be done with this book! I was really looking forward to this book and I was just disappointed!
Posted by Unknown at 18:55