Only We Know by Simon Packham 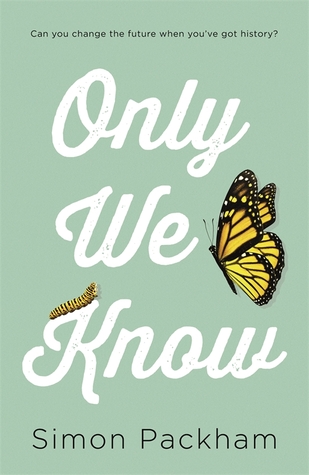 What is the secret of Lauren's past?

Lauren's family have moved house very suddenly, and she and her sister Tilda have to go to a new school. Lauren's determined to reinvent herself, but she's panic-stricken when she sees Harry, who she knew a few years ago. Luckily Harry doesn't recognise her, and she knows she has to make sure it stays like that.


Lauren, unlike Tilda, settles in well. She makes friends, is helping to organise the school fashion show, and has boys asking her out. But just as her life finally seems to be looking up she starts receiving macabre packages. When she gets a message: 'Isn't it time your new friends knew all about you?' she has to admit that someone knows her secret. But who - and what should she do?

Only We Know is a very mysterious story about Lauren who has a big secret - you don't really know what's actually going on until the end and that's probably what I disliked the most about this story.

You know those books where there is this big secret you don't know anything about? Either you love those stories or you don't and sometimes the ending, the big reveal, is quite anticlimactic. The ending in Only We Know is probably one of the most surprising endings I've ever come across, but the story leading up to it is not anything worth mentioning. Sorry.

Our main character is Lauren, they moved to another city because of her and her secret and that's basically what the story is about. The book is quite short so you can't expect major character developments but Lauren didn't really do it for me anyway. I found her annoying, extremely paranoid and I just didn't like her.
The parents I downright hated, they are so pushy and want to know everything that's going on with her. I would hate it if my parents were like hers.
Harry is probably the only character I like in this whole book, the transformation he's gone through, the development, is amazing. I wouldn't describe him as perfect, like Lauren does, but he's definitely a great guy. So trustworthy, sweet and very thoughtful and kind. All the traits we like in boys! If the book had been better I probably would have considered Harry as a new book boyfriend.
The theme, for me, when it comes to characters is that I find them quite flat. If the characters had been more interesting, or just better, I think I would have liked the story more.

The secret. Even though it was this big secret who drew me to the book it is actually the thing I disliked the most. The problem is that you have no idea what the secret actually is; did she kill someone, did she hurt someone or did she send nude pictures to the whole school? Sometimes these mysterious books are the best, but the execution in this one ruined everything. If you have no idea, and I really mean no idea, what's going on it's really not that funny. I understand that the ending should be quite climactic and surprising, but when you don't get any hints to what the secret is, the reader gets, or I get, quite annoyed.

So, even though I was looking forward to this book it disappointed me on a whole other level. The characters are flat, the main character is boring, the mystique ruins the book and the ending is quite climactic. The only reason I didn't give this book a lower rating is the ending, I appreciate the idea and I liked the surprise, but the mystique was too much.